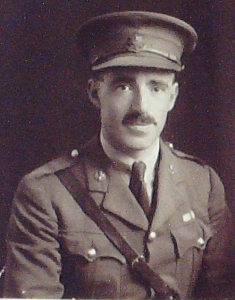 Personal: George was born on 7th March 1885 in Burslem, Stoke-on-Trent, Staffordshire. He was the son of George Harvey (Foreman Cooper – progressing to Brewery Manager by 1911) and Elizabeth Anne (née Merriman) Jacobs.

In 1911 George’s parents and sister Evelyn were at the same address, but (Census RG 14/7496) he was a ‘Boarder‘ and employed as one of 5 ‘Assistant Schoolmasters‘ at 90 Hadham Road, Bishops Stortford, Hertfordshire (possibly at St Joseph’s Catholic School).

This marriage does no appear on British Records, so presumably took place in Belgium. However, the “Nantwich Guardian” (20th September 1918) reported George and Marie’s engagement on 30th August 1918. As George did not return to England until 17th November 1918, their engagement must have been whilst he was still interred at Sheveningham in Holland (see below). No record has been found of any children of the marriage.

George’s Medal Index Card, about 1920, gives his home address shown as c/o Parr’s Bank, Crewe, Cheshire, as does his Pension Ledger, about 1921 when he was aged 36. This also details a ‘disability‘ of “Influenza” and his rank as “Captain“.

The 1934 Kelly’s Directory has George living at 44 Salisbury Road, Dover, Kent, his family home for the rest of his life. In the 1939 England and Wales Register he was a listed as a ‘Modern language tutor 4 languages for Services (illegible)‘ This was at Dover College.. He was also in the Army Officers Emergency Reserve. 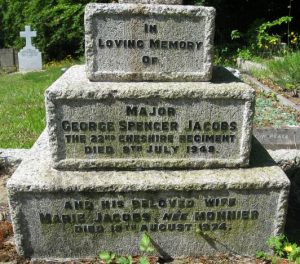 The Obituary Notice says that George’s funeral service was at St Peter and Pauls’ Church, Charlton, Dover, followed by interment at Charlton Cemetery. His death was described as “sudden” and the fact that he was “… a prisoner (of war) for four years … undoubtedly and sadly undermined his health.“.

“In military and civilian circles he will be remembered and sadly missed.”

Military History: George was Gazetted as a 2nd Lieutenant on 12th February 1911 and posted to the 1st Battalion, Cheshire Regiment, from the 3rd (Militia) Battalion. Unusually, his period of service and movement through the ranks cannot be found in “Hart’s Army Lists“. From correspondence, however, it seems that George was promoted to Captain on 24th November 1915, whilst he was a prisoner of war.

Captain Arthur Dyer was the C.O. of ‘A’ Company and was ordered to take up position to the east of the line facing the oncoming German Divisions, covering the Wiheries-Audregnies and Elouges-Audregnies road junction.

His 2nd i/c was Captain B.E. Massy, also severely wounded, as was Lieutenant W. G. R. Elliot  D.S.O. The other two Officers of the Company were 2/Lt. I. Fairweather and 2/Lt. G. S. Jacobs (Special List), who were 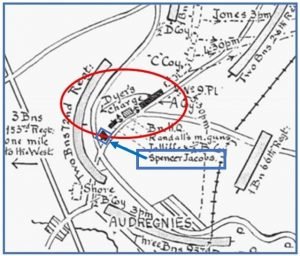 I had drawn my sword with scabbard on, the latter, I remember pulling off, and throwing away. There was a hail of bullets, and how I escaped I don’t know. I made up my mind it was certain death.”

As a Junior Officer in ‘A’ Company it is almost certain that George would have taken part in what became known as “Dyer’s Charge“. There were no reports that Ian had been wounded during the Battle of Audregnies, only that he been taken prisoner, probably as his Company tried to withdraw.

Lt Col Boger wrote of him ‘Lt Spencer Jacobs showed keenness and pluck in leading forward his platoon against a body the enemy advancing up the slope under cover’. Crookenden’s sketch map above shows George’s section on the left of ‘A’ Company’s position, just at the spot where the land slopes downward towards the road.

Part of the account of Lt. C.A.K. Matterson reads: “1.00 pm I met Major Stapylton who said that he wanted the left reinforced i.e. Shore who was in or near Audregnies. I volunteered to go to the left flank with Campbell and we started to go to where Lt. Jacobs was commanding a platoon.

I said “Come on, Jock, we’ll reinforce the left”, and Campbell answering, ran after me. Two paces behind me he fell, hit through the head, and he died almost at once. I lay down  among Jacob’s platoon and carried on firing. I then realised how terribly helpless we were, I saw the Germans steadily out flanking us to the left.” [N.B. Lt. Charles Arthur Campbell is buried in Cement House Cemetery.]

After George was taken prisoner the ICRC (International Committee of the Red Cross) Records show on 6th March 1915 he was at Gütersloh p-o-w camp with Lt R. H. Bolton and on 18th April 1917 at Crefeld also with Lt Bolton. By the 3rd July 1917 he had moved to Strohen.

On 13th -14th June 1918 George was ‘At home’ at Sheveningham in Holland with other Cheshire Officers and wives at ‘The Blighty Hut’, including Lt. Col. Boger, Major and Mrs B.H. Chetwynd-Stapylton, Captains A.J.L. Dyer, W.L.E.R. Dugmore, and B.E. Massy, and Lt. and Mrs C.A.K. Matterson. (Source: Oak Tree Magazine) He was finally repatriated from Holland, via Hull, on 17th November 1918.

George’s Obituary Notice (see above) says that he was “… a prisoner (of war) for four years … undoubtedly and sadly undermined his health and he was unable to rejoin his Regiment in India in 1921.“.

George’s Medal Index Card states he was extracted from Officers’ Roll on 6th July 1920. At that time his rank was still 2nd Lieutenant. George’s Medal Index Card, about 1920, gives his home address shown as c/o Parr’s Bank, Crewe, Cheshire, as does his Pension Ledger, about 1921 when he was aged 36. This also details a ‘disability‘ of “Influenza“. His rank is described as “Captain“, granted on 24th November 1915, whilst a p-o-w.

Shortly afterwards he wrote to ‘The Military Secretary‘ from his home at 11 Laurenston Place, Dover, asking for an advancement to the rank of Major in the Special Reserve, “… as I believe I could still serve for a number of years and not retire at this present juncture“.

At the outbreak of WW2 he “immediately offered his services, and again was in the first Expeditionary Force for the Continent” and in 1940 he was recalled from the The Regular Army Reserve of Officers to serve as a Lieutenant (London Gazette, 7th June 1940, p. 3423).

George was evacuated from Dunkirk and was attached to P-o-W camps. “He did not spare himself despite the strain on his health until July 1947. In military and civilian circles he will be remembered and sadly missed.”

George died only a year later, on 8th July 1948, at his home, ‘The Chalet’, 44 Salisbury Road, Dover, and was buried in the local Cemetery at Charlton, Dover.