In 1901 (Census RG 13/965) Charlotte with her children had returned to England to live at 1 Alexandra Terrace, Bognor, Sussex. By 1911 (Census RG 14/70) father William had retired and was boarding with his wife at 3 Kensington Gardens Square, Paddington, London. The children were not with them. Charlotte died on 3rd April 1914, at Edinburgh House, Waterloo Square, Bognor. 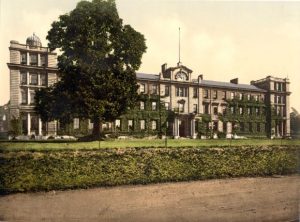 By 1911 (Census RG 14/6684) 18 year old William was enrolled as a “Gentleman Cadet” at the Royal Military College for Training Officers for the Army, Camberley, Surrey (pictured left).

From here he enlisted in the Cheshire Regiment as a 2nd Lieutenant, on 11th November that year. 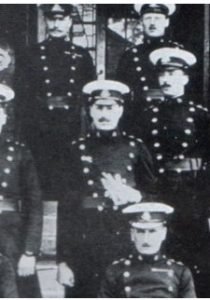 William was promoted to Lieutenant on 14th March 1914. Promotion to Captain followed on 1st October 1915 even though William was a prisoner-of-war by then.

The section of a photograph of Officers taken at the time (right) shows William in the centre.

On his left is  Lieutenant C. A. Campbell, of ‘D’ Company, killed in action on 24th August 1914. In front is Lt.-Col. H. F. Kellie, shortly before he handed over command to Lt.-Col. D. C. Boger. Most of these Officers, including William sailed to France on 14th August and marched to meet the enemy.

Captain Arthur Dyer was the C.O. of ‘A’ Company and was ordered to take up position to the east of the line facing the oncoming German Divisions, covering the Wiheries-Audregnies and Elouges-Audregnies road junction.

His 2nd i/c was Captain Bertie Massy, who was severely wounded, as was William Elliot. The other two Officers of the Company were 2/Lt. I. Fairweather D.S.O. and 2/Lt. G. S. Jacobs (Special List), who were both taken prisoner.

Simpson (‘The Cheshire Regiment and its Miniature Colour’ (Published in Chester 1929, reprinted 2012) described the heroic action of Lieutenant Elliot, for which he subsequently received the D.S.O.:

‘Lieutenant Elliot with a platoon of “A” Company on the Élouges-Audregnies road, had his attention drawn to a wounded man – Private Millett (Probably Mullett) – about 100 yards away, trying to get back to the road but unable to do so although he managed to get occasional shots at the enemy. Seeing that he was completely exhausted, the Lieutenant rushed forward, dropped by his side, unfastened his equipment, turned him over on his (the Lieutenant’s) back, and under heavy fire crawled back to the sunken road where, on reaching the bank he (the Lieutenant) got shot through both feet. His men removed his boots and bandaged his feet, and he again took up his sword and a rifle and resumed his position with the platoon (he received the DSO for this action).

Seeing the position as hopeless, he ordered his platoon to retire, but was unable through loss of blood to retire with them, he crawled to the deserted cottage where several men were taking cover. As the rear wall of the cottage (facing the enemy) had no openings through which to fire, the occupants decided to await the approach of the enemy, intending to fire on them as they entered the cottage. The door was slowly opened and they were about to fire when, instead of the Germans, they saw Corporal Murdock leading a horse in. As he entered he said “Take care of this horse! They have killed the other one but I am dammed if they are going to get this one!” He walked out of the cottage saying “They can kill me but not my horse,” This horse was one attached to the S.S.A. wagon with ammunition for the machine guns. Owing to the hail of shell the remaining machine gun which was placed at the right rear of the cottage was useless, as the gunner, Private Taylor dared not expose himself or the gun owing to the heavy hail of shell from the enemy.

Lieutenant Elliot therefore ordered Taylor to bring the gun into the cottage. The breech block was removed, and the gun made unusable. In the meantime, Elliot tore up his maps into small fragments and threw them in out of the way places in the cottage. He then made several attempts to break the blade of his sword so that it would not be surrendered to the enemy – as it had been carried by his father (Col William Henry Wilson Elliot) and his grandfather, but this he was unable to do before the enemy surrounded the cottage and a party with fixed bayonets demanded the surrender of the few Cheshires. Elliot refused to surrender his sword except to an officer. Captain Rogge of the 72nd Regiment, (killed later in the war) came forward and received Elliot’s sword, but seeing the weak condition he was in through loss of blood, returned it to him. While Elliot lay on the side of the road the 4th German Corps passed by.

No wonder most of our casualties were owing to shell fire; the number of heavy and machine guns was enormous. Every soldier speaks of the heavy German gun fire, and the speedy way they got the accurate range of any fresh position. The long-range rifle firing was the reverse and ineffective. Many of our men remarked “They couldn’t hit a man if he was placed at the end of a rifle.” The German infantry did not sight their rifles and fired from the hip.’ 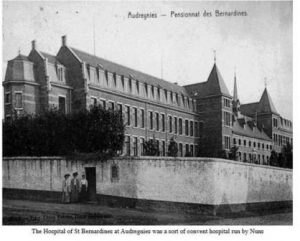 After his capture William remained at the Hospital in Audregnies (right) along with fellow officers Dyer, Jolliffe and Jackson of the Cheshires and Gallagher of the 4th Dragoon Guards, from 25th August to 2nd September 1914.

William read out the letter in the Officers’ Mess after the war. At the time of writing William was still at Audregnies along with several other brother Officers while others were on the way to Fort Bruckenkopf at Torgau (postcard picture left):

“Dear Elliot I was so very glad to hear from you. I have been worrying over our left and hoped they had got away, but felt it was impossible. I found on our right the Norfolks had retired or been scuppered and the Germans enfiladed us from the railway and had got almost to our rear. We tried to make away 1⁄2R towards the village just in rear of your left and very decent order was maintained by Sergts. Meachin, Rothwell and Dowling, but all 3 were wounded and nearly all the men.

I was very lucky to be hit 3 times and none serious. Hand by shrapnel and thro’ foot and flesh of thigh by bullets. We had no chance, no information and no instructions, except to guard the road and think we did our best possible. I pray we may get exchanged when well. I hear Jones, tho’ wounded, refused to surrender and pointed his revolver at them. They shot him but left him his arms and the 66th Regt. buried him with mil’y honours and a speech was made at his grave. A very gallant man. So sorry Jolliffe and Jackson were hit badly and for all our casualties, but I think they will say we did our best with both flanks turned. [N.B. Captain Ernest Rae Jones, o/c ‘D’ Coy.]

Yours ever, D. C. Boger – There are about 60 here, ours and Norfolks, mostly wounded. I heard Rich and Stewart were killed.”  [N.B. Capt. William Suttor Rich survived the Battle at Audregnies, but died of his wounds received at Violaines, on 9th December 1914. 2/Lt. W.L. Stewart was seriously wounded and taken prisoner at Audregnies.]

After leaving Hospital at Audregnies Prisoner-of-War Records show that on 9th September 1914 William Elliot was in hospital in Paderborn with Captain E.A. Jackson. In November 1914 William was next recorded in Fort Bruckenhopf, Torgau, along with several other Cheshire Officers (Major Chetwynd-Stapylton, Captain Tahourdin and Lieutenant Matterson) where he remained until 26th November 1914, when they were moved to Burg p-o-w camp (right).

During his time at Torgau along with 24 others William formed a choir! (Source: B.G. O’Rorke, ‘In the hands of the enemy’. When he left Torgau, he took with him the lamps from the chapel!

The Chester Chronicle of 18th September 1915 published quite a chatty letter from Major A.J.L. Dyer (dated 29th August 1915), predominantly about William, which read:

“Torgau. Dear Miss Brown, – Very many thanks for the parcel of literature, etc., which you so kindly sent, and which was much appreciated. Mr. (Lieut.) Elliot made an unsuccessful attempt to escape the other day; he is in prison for a bit. We have had a lot of rain lately, which is a nuisance. With kind regards. – Yours faithfully, A.L. Dyer, Major, Cheshire Regiment.” (Source: ‘FindmyPast‘ – newspapers)

From I.C.R.C. (i.e. International Committee of the Red Cross) records William can be traced being moved from and to the following POW camps in Germany before eventual internment in Holland prior to repatriation almost a year later:

On 16th November 1918 William was repatriated from The Hague on S.S. Stockport to Hull with Lieutenants C.A.K. Matterson and R.H. Bolton.

In October 1919, William visited Audregnies (possibly with Captain J.C. Sproule) and reclaimed possession of the sword he had surrended when captured and wore it on parade thereafter, says Simpson (page 48)

After retiring from the Regiment, William and his wife, Margaret, moved to live in Farnham, Surrey. Margaret died on 12th March 1972 at 22 Cleveland Square, London. William died at Worthing, Sussex, in the June quarter 1978, aged 86. He was the last surviving Officer of the original 1st Battalion who went into action in August 1914.

William’s brother, Lt. Ian Frederick Lettsom ELLIOT, served with the Suffolk Regiment, attached to the Machine Gun Corps. He was posted to France on 1st April 1915. He later transferred to the R.A.F.