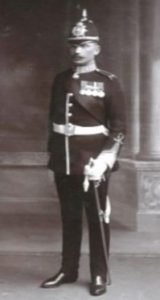 He was the son of William Thomas (Colour Sergeant, 54th Regiment) and Jane (née Chambers) Sproule. He had 3 older siblings, William (died as a baby in 1867), Annie Chambers and William Gausset, and 3 younger, Martha Jane (died aged 8 in 1872), Mary (died as a baby in 1876) and Frederick Crawford [See Footnote below].

On 22nd August 1904 James married Fanny Wood at St Gabriel’s Church, Hulme, Lancashire. His occupation was stated as “Colour Sergeant, 2nd Cheshire Regiment“, living at ‘The Castle, Chester‘. Both fathers, William (Sproule) and Walter (Wood) were identified as ‘Soldiers‘ on the Marriage Certificate. 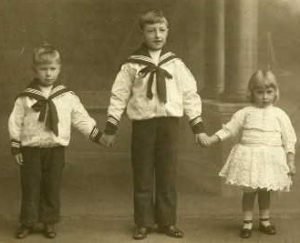 Their son, Walter Chambers [See Footnote below], was born on 27th June 1905. Another son, William Watson, was born on 21st May 1908, and daughter, Mabel Vera, on 26th February 1910. The Census of Ireland the following year shows the family enumerated with the 1st Battalion in Antrim, Ireland. (Photo left, from a family history source, probably dates from about 1912)

James’ Medal Roll Index Card (c. 1920) gives a home address for himself and his wife as 467 Stretford Road, Old Trafford, Manchester. The 1939 Register shows James as an “Army Officer, Retired“, living with his wife, Fanny, at 6 Langley Road, Sale, Cheshire.

The 1st Battalion was stationed in Londonderry from January 1913 and on 9th April 1913 Sergeant Major James Sproule was promoted to Lieutenant Quartermaster. On the 4th August to everyone’s surprise, orders were received to mobilise for war in Europe.

The photograph of Officers taken at the time (left) shows James, on the left, back row. On his left is Lieut. T. L. Frost (Transport Officer), killed in action 28th March 1915.

At the end of the day the War Diary records that “At roll call in Bivouac at Les Bavay there were 6 Officers, a Warrant Officer and 199 men – The strength marching out at 7.30 a.m. on the morning of 24th inst. was 27 Officers, 1 Warrant Officer and 933 men – A loss of 78% most of which was caused in the withdrawal.” James was one of those 6 Officers to get away from the action without being killed, wounded or taken prisoner.

The enemy launched a huge offensive on the 20th October 1914. It reached from Arras to the sea and it included of course a heavy assault upon the 1st Battalion at Violaines. During the 21st and the 22nd October the Battalion lost rather more than 200 NCOs and men. The battalion in effect had ceased to exist.

Such as they were, they continued the business of digging trenches, all utterly exhausted. The adjutant, Lieut. T. L. Frost, took over command and “… the grand old QM, Micky Sproule, assumed the appointment of Adjutant“. It is a sad and sufficient commentary to note that in this month of October the Battalion had no less than seven Commanding Officers. (Source: ‘Ever Glorious‘, Bernard Rigby, Chapter 36)

James’ skills and experience would, no doubt, have been invaluable in organising and reorganising the depleted Battalion and incorporating the replacements and reinforcements in readiness for the return to action. [See Crookenden’s comments below]

The next time ‘Micky’ appears in the Regimental History is during the First Battle of Ypres. The Battle of Nonne Bosschen on the 11th November 1914 marked the final attempt of the enemy to break through to Ypres. The Kaiser joined his troops at the front, making his own exhortation to them to drive ‘the contemptible British army into the sea’.

At dawn on the 10th the enemy began the laying of a tremendous barrage of fire. It is recorded in the 1st Battalion War Diary, which adds a note that ‘the enemy appeared to be massing in a wood south of our position, but our shells scattered them, and they were easily repulsed by our rifle fire, with heavy casualties to them‘.

‘Although the actual fighting was not so severe as later on’, writes Crookenden ‘this tour of the trenches was as unpleasant as any of the first two years. It was the beginning of trench warfare, without any of the amenities which were afterwards introduced. There were no sandbags, no communication trenches, no shelters of any kind, no cooking, though Sproule managed to bring tea to the trenches every day. The rum ration two or three times a week is the only solace the men had. It was most uncomfortable.’ [Source: “The History of the Cheshire Regiment in the Great War“, p. 31 – Col. Arthur Crookenden] 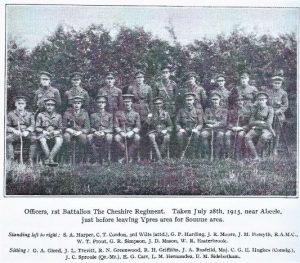 ‘In March 1917‘, writes Crookenden, p. 99 , ‘the 1st Battalion took over a new sector near Cambrai from a Battalion of the 21st division… During the whole of this winter, the Battalion was very short of establishment, all reinforcements being diverted to units on the Somme. As a result, the front was often very weakly held, and they had to resort to a system of defended posts along the line… Throughout this winter, which was an exceptionally cold one, the usual precautions were taken against “trench feet” and when in billets, every effort was made for the men’s comfort, hot baths and frequent changes of clothing being provided. Leave home was opened and everyone, who could, availed themselves of the opportunity to visit England once more.

After the winter of 1914, it was always possible to deliver one hot meal a day to the trenches, as well as tea. Sproule (the QM) put the food in hay-packed containers to keep it warm. Clean socks went up every night. Old jam tins, filled with grease and a wick, enabled the troops to cook tea for themselves, a dry issue of tea being made for the purpose. On returning to rest each man got a hot bath, a change of clothing and a good hot meal.’

On 12th December 1917 the 1st Battalion was posted to Italy, where they seemed to have a quiet time, but returned to France on 4th April 1918.

Quartermaster J.C. Sproule was listed among the 1st Battalion Officers as they prepared for the 3rd Battle of Albert, 21st – 23rd August 1918. Crookenden (p. 154) tells us the Battalion marched to its assembly point, west of Bucquoy. Its objective was the railway line south-east of Achiet-le-Petit, which was achieved in about 15 minutes. A counter-attack was successfully repulsed.

The 1st Battalion reached Pont-sur-Sambre at about 10 p.m. on 4th November 1918 to be received by heavy shell-fire. Patrols went forward down to the river but no attempt, at this stage, was made at a crossing. Two companies of the 1st Battalion went across and made good the line of the railway. 95 Brigade now took over and the Battalion went into billets in Pont-sur-Sambre. The casualties were one officer and four men killed and 40 all ranks wounded.

‘The final pursuit of the Germans’ writes Crookenden, ‘back to our starting point at Mons was begun by the crossing of the Canal du Nord. It then continued through Flandres (Ypres), Artois (Selle) and Picardy (Valenciennes).‘

The story of the Miniature Colour of the 1st Battalion Cheshire Regiment is fascinating. Having been taken into battle on the 24th August 1914, before the Battalion was over run, it was hidden in the village by the locals who kept it from the Germans throughout the war despite numerous searches.

In October 1918, nearing the end of hostilities, the Battalion happened to be twelve miles from Audregnies, and on 13th November 1918 a search party was despatch to try to find it. The Quartermaster, still Captain Sproule of the original 1st Battalion, having survived the war, along with a colleague (possibly Lieutenant W.G.R. Elliot) visited Audregnies on 15th November and were informed the colour was bricked up in a wall, so went back on the 19th to collect it.

The full story of its origin, loss and its recovery and his part in it is told by Frank Simpson in his book ‘The Cheshire Regiment and its Miniature Colour’ (Published in Chester 1929, reprinted 2012)

Crookenden’s final mention of Mickey Sproule (pps. 171-2) reads as a ringing endorsement to the high esteem he was held in the Regiment:

“It is difficult to say how much the Regiment owes to the Quarter-master of the 1st Battalion, Major J.C. Sproule, M.C. He, and many men in the same position, went right through the war as Quarter-masters. They saw many hundreds of N.C.Os who they had trained and taught all they knew, become commissioned Officers. Their work debarred them from many of the honours to be gained from actual fighting. Yet it is due to these men that the Regular Battalions of our Army never lost their distinctive quality.

By 1917, the personnel of the Regular Battalion was exactly the same in Officers and men as the New Army and Territorial Battalions. Yet one could always tell a Regular Battalion, in or out of the line. The maintenance of prestige and esprit de corps was, and must have been, due to the Quarter-masters, because their was no-one else to carry on the tradition.

Of Sproule himself, it is impossible to say too much. No Battalion was better served by its Quarter-master than the 1st Battalion. Clean clothes, dry socks and other creature comforts, and at least one hot meal every day was always produced at the right time. Sproule always took his turn in bringing the transport to the Battalion at night. He and Bruce, the Transport Officer, did more than can ever be told for the morale of the Officers and men. It was the regularity of their services, in any and all conditions of weather, or of enemy action, that made their work so valuable.”

James was awarded the Military Cross in the New Year’s Honours List, 1918. ‘The Times’ reported: “The New Year Honours represent largely the circumstances of war, and, perhaps, as usual, they also reflect human nature in an obvious form. The list is one of the rare opportunities for the public to scan the names of soldiers who have distinguished themselves in service.”

On 6th April 1945 he was promoted to Temporary Lieutenant-Colonel.

James’ brother, Lance Sergeant Frederick Sproule, 3rd Lancashire Fusiliers, attested at Belfast on the 2nd June 1891 for the Dorsetshire Regiment at the age of 14 years.