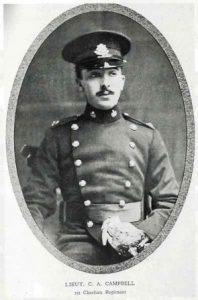 Charles was educated at Downside School from 16th September 1901 as one of the youngest boys, and at the Royal Military College, Sandhurst. He passed out in December 1909.

At that time Charles’ parents were living at Wye House, Downview Road, West Worthing, Sussex. Arthur (who died in 1920) is also described as a “Gentleman” and the family had 3 servants (1911 Census RG 14/5340). 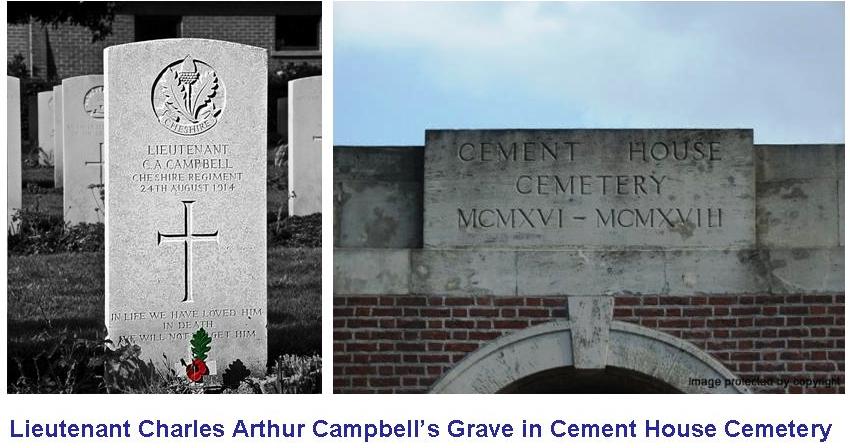 Photographs show him at the Consecration of the Regimental Chapel in Chester in 1912 (ringed, below left). Two places to his right is Capt. Hugh Irving St. John HARTFORD (killed in action 22 October 1914) and next to him is Capt. Lionel Archibald FORSTER, who died as a Prisoner of War on 4th November 1914.

Shortly before the Regiment left Londonderry in August 1914, Lieutenant Campbell was photographed (ringed, above right) again with Captain Hartford (bottom left) and in the centre at the back is the Regimental Transport Officer, Lieutenant Thomas Laurence FROST, killed in action 28th March 1915.

Charles Campbell’s Medal Index Card shows that at the outbreak of War and entered France on 16th August 1914. He was killed in action on 24th August during the action at Audregnies. From the Regimental Roll it is apparent he served under Captain Ernest Rae-Jones, of “D” Company and the two Officers died within a few yards of each other either side of the Audregnies to Élouges road.

In his book “Ever Glorious” Bernard Rigby describes the action at about 5 p.m. on the afternoon of 24th August:
“Maj. Chetwynd-Stapleton, now the senior regimental officer, realised the perilous position of ‘B’ Company, bearing in mind the importance of Audregnies for the security of the left flank. He decided first to try to find Lt.Col. Boger and so at about 5 p.m. he set off up the road towards the right flank. Before doing so he left orders with Lt. Campbell to find out what had happened to Capt. Shore.

The major’s first encounter was with Sgt. Raynor who was just beginning the second withdrawal of his 9 platoon. Both learned much from each other, the consequence of which was that Sgt. Raynor was ordered to continue his retirement and Maj. Chetwynd-Stapleton returned to HQ. Here he discussed the situation with Capt. Dyer of A Company. Chetwynd-Stapleton was under the impression that Shore’s two platoons were still holding Audregnies. In his sortie to find out what had happened to Shore, Campbell was killed.”

Charles “Roll of Honour” entry states that he was: ” buried in the Cemetery at Audregnies “.

However, the CWGC comments for Cement House Cemetery state that after the Armistice graves were concentrated in that cemetery from battlefield and small cemetery locations, including: ” AUDREGNIES CHURCHYARD, which contained the graves of eight British soldiers of August 1914 and one of November 1918. ”

The Église Saint-André d’Audregnies is pictured on the left. 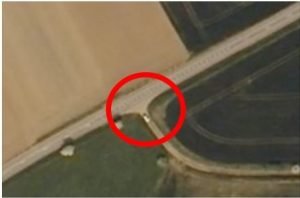 Jack Horsfall and Nigel Cave’s account of the Battle (“Mons – 1914” page 183) gives the place of Lieutenant Campbell’s death as a small bridge over the railway line from Audregnies to Dour. 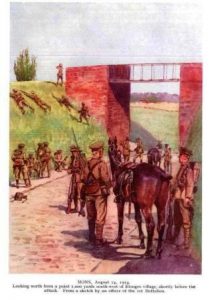 On the modern aerial view right this is approximately in the position of the car, at the junction of the old railway track and the road from Audregnies to Wiheries.

The postcard (left) entitled: “Mons – August 1914“, bears the legend “Looking north from a point 1000 yards South-west of  Elouges village – shortly before the attack. From a sketch by an Officer of the 1st Battalion.“.

The position at the junction of road and railway line matches the description in Horsfall’s book.

A very interesting account of the ‘Battle at Audregnies’, not yet published, was written by Lieutenant C.A.K. Matterson, the Battalion’s Chief Scout Officer.

He wrote it in his diary 7 days after the battle, by which time, on 1st September 1914, he was already a prisoner interned at Fort Bruckenhopf, Torgau.

This account is an extremely enlightening and moving personal account of the ‘Action’. It was copied from his diary by his daughter Jessica who passed it on to his granddaughter, Mary, who recently (20th September 2015) made the original copy of this unique record available.

The sections pertaining to Lieutenant Campbell are:

“ 12.30 pm At about this hour we were lying flat, trying to answer the fire, and we couldn’t see the Germans advancing, whilst thousands of shells screamed over us. Pte Corcoran, lying beside me, was hit and I took his rifle and fired with it. The order then came to retire to the sunken road, and I waited with a few men till the last, then ran back under heavy fire.

When I got to the road, I found Capt Jones and Lt Campbell and men of their Coys, and I realised that I had been very lucky to get back unhit, as they were firing very wildly from a bad position and several bullets from our men barely missed us.

I found that our position was more hopeless then ever – a very bad field of fire, in fact we had to kneel on the top of the bank to see at all. This I did using Corcoran’s rifle. Major Stapylton was on our left with Capts. Dyer, Jolliffe and Massy etc. I moved off to see what was going on.

1 pm I met Major Stapylton who said that he wanted the left reinforced ie Shore who was in or near Audregnies. I volunteered to go to the left flank with Campbell and we started to go to where Lt Jacobs was commanding a platoon. I said “Come on, Jock, we’ll reinforce the left”, and Campbell answering, ran after me. Two paces behind me he fell, hit through the head, and he died almost at once.”

” 4.30 pm I then helped in looking after the wounded. I found many killed. Jolliffe was hit very badly twice and Massy once. The rest of the evening we spent tending the wounded. At sun set we buried Campbell together with Garston, a subaltern of the 9th Lancers. I then went out to look for Jackson, who I heard was wounded, and found him, doing what I could for him. I got a doctor to him but I fear he died. I spent the most awful night of my life on the field, midst the dead and dying.  “

The 9th Lancers’ Officer buried with Charles Campbell is in fact Lt. Charles William North Garstin – 9th (Queen’s Royal) Lancers. Like Charles, his body was re-buried in Cement House Cemetery, Grave XVIII. A. 19., alongside Charles in Grave XVIII. A. 18.

Lieutenant Campbell’s military service and where he is buried.

Lieutenant Campbell’s 1914 Star, with clasp, British War and Victory Medals and Memorial Plaque were sold at auction for £3,200 on 17th August 2021. 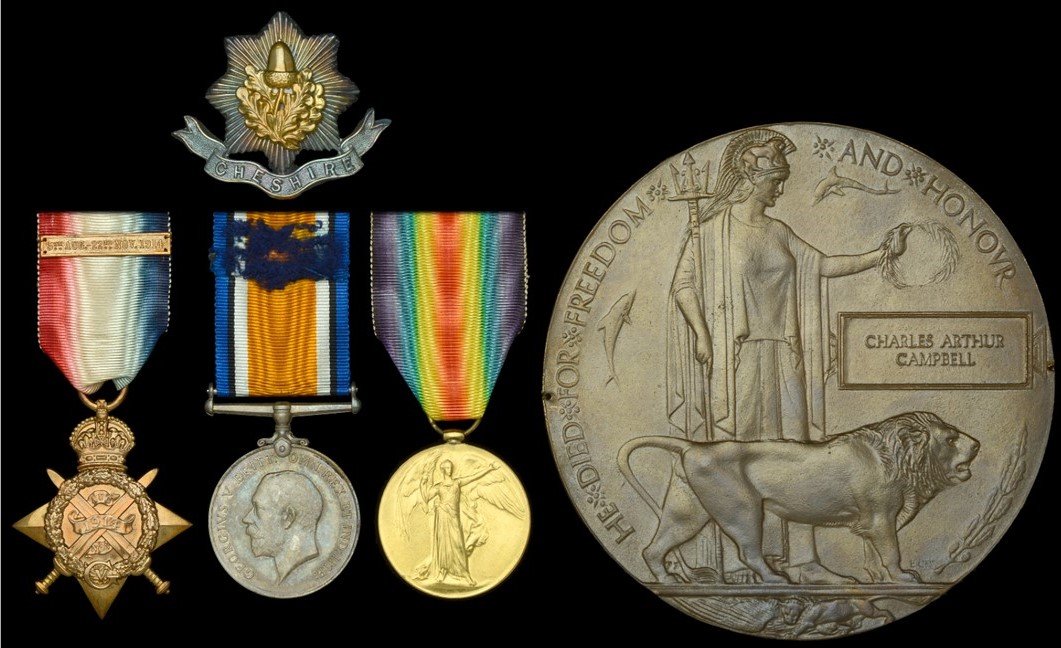 This entry was posted in Cement House Cemetery  and tagged Killed in Action. Bookmark the permalink.