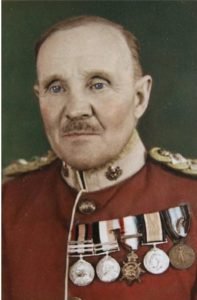 The family was at the same address in 1891 (Census RG 12/695). Ten years later Eric was serving with his Regiment in South Africa.

Eric was educated at Wellington College, with Victor Tahourdin from 1896-1898 although they were in different houses, and then at Sandhurst. By 1911 he was enumerated with the 1st Battalion in Ireland.

Eric retired from the Army on 11th May 1921. His Pension Record shows he had received a Gun Shot Wound to the right shoulder. The 1939 Register shows the Eric and Amelia living at 1 Ladbroke Gardens, Kensington, London. However, a family source has confirmed that Eric was actually away in Corsica/ France, where he had been for several years, hunting wild boar with his own pack of hounds.

On 13th July 1946 at Pietermaritzburg, Natal, South Africa, Eric married Helen Gillett. born on 20th October 1909 at Veryan, Cornwall. They had 3 children whilst in South Africa. Amelia and the children returned to England in August 1954, sailing on the S.S. Bloemfontein Castle, from Beira, Mozambique, on the 14th, arriving in London 10 days later. Eric followed 4 months later.

After the war Major Jackson worked a few years for the War Office before being invalided out.  He enjoyed a colourful life of hunting, shooting and fishing in France and Corsica until WW2 and wrote a regular piece in ‘Horse and Hound’ under the pseudonym ‘Foxhunter abroad’. 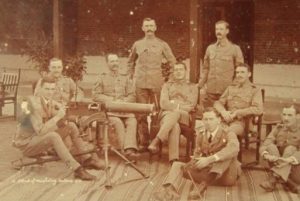 Although enlisted in the 2nd Battalion, his Medal Roll shows that Eric was attached to the 8th Mounted Infantry.

Eric was serving with the 1st Battalion in Londonderry, Ireland, when on the 4th August to everyone’s complete surprise, orders were received to mobilise for war in Europe. Lieut-Colonel D.C. Boger was in command and Major B.H. Chetwynd-Stapleton was the senior major. Capt. V.R. Tahourdin was adjutant, and the four companies were commanded by Capt. A.J.L. Dyer, Capt. J.L. Shore, Capt. W.L.E.R. Dugmore and Capt. E. Rae-Jones.

So at the outbreak of War Eric sailed for France, 2nd in command of ‘C’ Company, 1st Battalion. The Battalion marched into the line south of Mons and first saw action at:

Both Battalions, 1/Norfolk and 1/Cheshire, marched from Dour to Audregnies and at about 11.00 a.m. Colonel Ballard (C.O. 1st Norfolks) began to place his Battalion along a line from 800 yards. North of Élouges along a track parallel to the main road between Élouges and Audregnies. 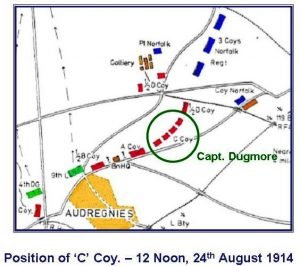 Colonel Boger deployed his Cheshire companies to extend the Norfolk lines westwards for about a mile to the outskirts of Audregnies and ‘C’ Company, under Captain Dugmore were positioned in the centre along the road between Audregnies and Élouges.

The Company dispositions were:- ‘D’ under Capt. Rae Jones on the right straddling the railway line, ‘C’ under Capt. Dugmore in the centre and ‘A’ under Capt. Dyer on the left, covering the road junction, Wiheries-Audregnies and Élouges -Audregnies.

‘This‘ remarks Crookenden, ‘should have given warning of a wider turning movement, but Colonel Boger was still under the impression that there were British or French troops on that flank, and did not think the situation particularly dangerous.’

Meantime ‘A’ and ‘C’ Companies faced an advancing enemy. ‘(Capt.) Dugmore’ writes Crookenden ‘opened rapid fire, causing havoc in the advancing German ranks. The fire control was what one would expect to find on the parade ground rather than the battlefield. But ammunition was running low.

Dugmore endeavoured, without success, to get in touch with his reserve supply carried on the Company mule, which appears to have retired with the support platoons of D Company. This shortage of ammunition, coupled with the continued and ever-increasing enemy pressure, caused Dugmore to decide that the time had now come to move. At about 4.30 p.m. therefore he passed the order down to retire “individually” from the right. He organised the men around him into two parties. The first he placed under Groves’ command and ordered him to retire forthwith, while he himself stayed behind with the remainder. Groves withdrew to a position east of the Elouges-Audregnies railway line and there waited for Dugmore.

The second party under Dugmore retired to a bridge on the mineral railway where he could obtain a good view. He ordered his men to line the railway cutting and called up Groves’ party to join him. But the field of fire was unsatisfactory, so he ordered Groves to take a few men and make a further bound to a cottage away to the east, while he himself remained with his party to cover their retirement.

Shortly before C Company started to move, Rich, with his two platoons near the colliery, had been forced to retire. Pressed in front and outflanked, he withdrew his men yard by yard, disputing every inch of ground. This grim struggle left an indelible mark on the minds of those of ‘C’ Company who witnessed it.’

This second phase of the battle developed into a series of isolated actions by small groups. When the group under Dugmore finally had to scatter and retreat, only one man escaped capture. 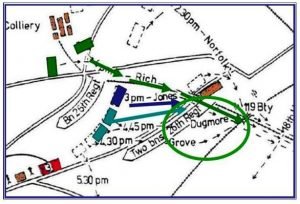 When Dugmore linked up with Groves he found that Officer and Rich, both with their men awaiting him. These two officers, who had shown extraordinary courage and leadership, then took their men off south-east and joined up with the brigade.

‘Their escape’ says Crookenden ‘was remarkable. They must have squeezed through between the van-guards of the German 66th and 93rd regiments converging on Wiheries from the north and west.’

…. The Action at Audregnies by reading this account compiled as his debrief statement by Captain Eric Archer Jackson.

Lt Cuthbert Matterson wrote after the surrender ‘I then went out to look for Jackson, who I heard was wounded, and found him, doing what I could for him. I got a doctor to him but I fear he died. I spent the most awful night of my life on the field, midst the dead and dying’.

Eric did not die, however, on 24th August 1914: ‘Captain Jackson was wounded and lying on the ground with his sword in his hand. A large stone was brought, the blade was put across the stone, and a German officer jumped on it and broke it.’ Simpson goes on to say, ‘ Just as it was getting dark a German doctor with an orderly came along, bandaged his wounds, and covered him with straw. Next morning (Tuesday 25th) German ambulances passed nearby, but he could not make them hear, and he lay on the field until about 2pm, when some civilians found him and took him to hospital in Audregnies.’

Captain W.E.L.R. Dugmore’s account of the action had some differences. He wrote: “I was given the order to continue deployment to “D” Company’s left with 2 platoons, and leave the other two platoons in support on the road, and that we were to hold the position against the Germans at all costs.  At this moment a very heavy artillery fire was opened on us.  I told Captain Jackson to take the two leading platoons and continue the deployment on “D” Company’s left.  I intending to remain with the two platoons in support.

Suddenly I saw Jackson with his two platoons move off to the left thus leaving a big gap on “D” Company’s left; I rode up to him and asked what he was doing.  He replied that the Adjutant had given him orders to do so.  I quickly found the Adjutant and asked the meaning of his order and discovered that he had made a mistake as to the Company.  As the enemy’s fire was very heavy now, there was nothing to be done, but to leave Jackson where he was, and on my own initiative I brought up one of my platoons that was to have been in support, and with it filled the gap.“

After ‘recovering’ Eric was taken to Germany where he spent his prisoner of war days in 12 different camps some of them twice. He tried to escape on four occasions but was recaptured each time.

On 16th December 1916 Eric was refused repatriation to Switzerland but was eventually accepted on 27th November 1917 and arrived in Mürren on 9th December 1917.

Along with fellow officers he was billeted at Hotel Regina. He spent the winter in Mürren before being sent home arriving in London on 24th March 1918.

In May 1917 a British clergyman Reverend R. Bulstrode was sent to Switzerland to help care for internees. After his visit to Mürren he called the camp “a prison in paradise”. Despite the stunning mountain views, many internees were suffering from boredom and the long term psychological effects of years spent as prisoners of the Germans. Many were confined to their billets by either their wounds or illness, or the snow.

Eric’s timeline of his journey taken from Red Cross POW records varies slightly from his own personal debrief and information gathered from other sources, but is certainly more complex than most: 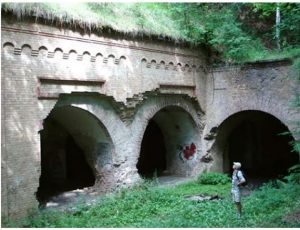 As can be seen Eric made 4 escape attempts. He described the the third escape attempt from Fort Zorndorf,  the Colditz of WW1, as:

‘I had passed the inner ring of sentries and was caught in the ditch of the fort. While the escort was leading me back into the fort, although an under officer was holding both my arms, a soldier hit me over the head with his bayonet, causing a gash in the side of my head, others hitting me with the butts of their rifles.’

For punishment he was put in a damp cell underground for a week without bed or clothes other than the jacket and trousers he was wearing despite there being a foot of snow and temperatures of 10°C.  He spent a further 3 weeks in a damp underground ‘caponier’ as he describes it, and even after being allowed back into the fort  spent a further 14 nights sleeping in that miserable place.’