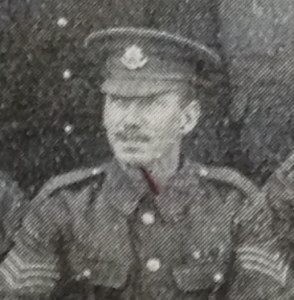 In 1891 (Census RG 12/3760) the family was living at Purston Lodge, Featherstone, Yorkshire. (Next to Purston Hall, the home of the Hall family.)

The 1939 Register shows Arthur and Lucy living at 41 Grange Road, Birkenhead. Arthur was employed as a “Recruiting Sergeant Major”, at the age of 6o still working for the Cheshire Regiment.

Arthur died at Clatterbridge Hospital, Bebington, Birkenhead, Wirral, on 10th November 1961, aged 81. The family home at the time was 10 Newlands Road, Bebington. His cause of death was liver and pancreatic cancers. In the March quarter 1964 Lucy re-married William R. Cliffe. She died in 1971.

Military Service: Arthur enlisted at Sheffield 12th July 1893, for 12 years active service. He stated his age as 14 years 0 months and posted to the 2nd Battalion. After 3 years’ service as a Private he received his 1st Good Conduct badge – a second followed on 12th July 1898.

On 11th June 1904 Arthur extended his period of service to 21 years and was again promoted to Lance Corporal on 1st July 1904. On the 12th of that month he received his 3rd Good Conduct Badge.

The first 6 years 179 days of Arthur’s service was based in England, but on 7th January 1900 was posted to South Africa. On 27th October 1902 he returned home before being posted to India on 29th September 1904. After just over 6 years he again returned home and after his transfer to the 1st Battalion was posted to Ireland until joining the B.E.F. in France in August 1914.

Arthur was due to be discharged after 21 years’ service on 11th July 1914, but was again allowed to extend his service beyond 21 years on 2nd March 1914, under Section 85 of the Army Act.

On the morning of 24th August 1914 the order came to send the 1st Battalion into action to hold up the enemy advance whilst the remainder of 5th Division withdrew.

… the ensuing action during the Battle of Audregnies.

About 5.00 p.m. the order came to retire. They left the road and moved along the railway line in the direction of the Bois d’Audregnies. To get to the railway they had  to negotiate several hundred yards of rising under heavy-machine gun fire.

Only about half-a-dozen men made it. Sergeant 4277 A. Raynor (9th Platoon, ‘C’ Company) fixed his bayonet and took upon himself the duty of scout.

They passed a small group of trees, then along a track in a field, into a hedge-bordered lane, then to pasture-land south-west of Wiheries.

Crookenden described what happened next: “‘Here they ran into the Magdeburg Regiment which was going into bivouac. Of those who remained Capt. Jones and Pte. E. Hogan were killed. Cpl. Crookes, who had previously been wounded, collapsed and Pte. F. Garrad was mortally wounded.

Raynor and Blake were soon rounded up by the enemy after a gallant resistance. Sgt. Raynor, who had shown great courage and initiative, and who had fought on to the last, was later awarded the DCM.

His true character is best shown by his own words when Cpl. Crookes saw him later in the grip of 3 Germans; “If I had known you were living I – well wouldn’t have given in“. The door to safety was barred, but a gallant fragment of the 1st Battalion still fought on.”

Arthur was captured at Audregnies on 24th August 1914, unofficially reported a prisoner of war (W.O. Communique 1185) and officially when interred in Holland on 29th December 1917. On 30th January 1915 he was in Munsterlager, and on 28th August 1915 Arthur was reported at Soltau Camp, before he was: “.. Zwecke Austauschs nach Aachen űbergefűhrt.” [Transferred to Aachen for exchange purposes] However, on 31st October 1917 he was still a p-o-w at Hameln (Hamlin). On 29th December 1917 Arthur arrived in Holland for internment.

In total Arthur served 26 years 355 days with the Colours, 4 years 159 days in France and Germany, all but 8 days of which was as a prisoner-of-war. His Military Conduct stated just one word – “Exemplary“. Arthur returned to duty at the start of World War 2 as a “Recruiting Sergeant Major“. 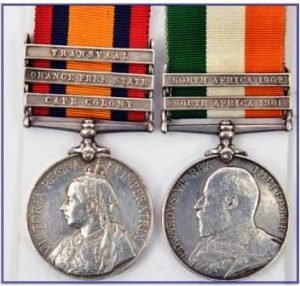 Arthur served as a Drummer / Bugler with the 2nd Battalion during the South African (Boer) War, gaining the Q.S.A. (3 Clasps) and K.SA. (2 Clasps), pictured right.