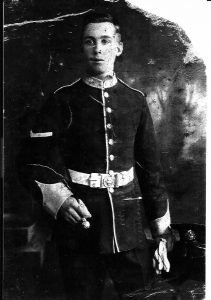 Personal: Walter was born on 13th November 1893 probably at 29 Thomas Street, Eccleshall Bierlow, Sheffield, Yorkshire. He was the son of Walter (Pen and Pocket Blade Forger) and Mary Elizabeth (née Eaton) Crookes (below). He had 2 older sisters, Polly and Sarah Ellen, and a younger brother, Arthur (see Footnote below).

In 1901 (Census RG 13/4348) the family had moved to 16 Egerton Street, Eccleshall Bierlow. Before the next Census, however, Walter and his younger brother, Arthur, born 19th July 1897, lost the rest of their family.

Mary had entered the Eccleshall Bierlow Workhouse (right) with Walter and Arthur in May 1906.  The two boys were registered into The Fulwood Cottage Homes in 1906.

They were discharged 1907 but readmitted until, in Arthur’s case, 1914 at which time he enlisted in the York and Lancaster Regiment. Walter likely left at an earlier time but there is no record of when he was discharged. Mary Elizabeth and her daughters, Polly and Sarah Ellen, died in the workhouse, Polly in the December quarter 1908 and Sarah Ellen on 17th June 1909.

The 1939 Register shows Walter and Dora and 2 sons, Leslie and Norman (both at school) living at 32 Stanley Avenue, Stalybridge, Cheshire. Walter was employed as an “Employment Officer (Supervisor) – Ministry of Labour”. He was also an Air Raid Warden.

Military Service: It is not known when Walter enlisted in the Cheshire Regiment, but his Service Number (10066) suggests February 1913. (Pte. 10064 John Evans enlisted at Nantwich, Cheshire, on 5th February 1913.)

His period of service would have been for 12 years (7 on ‘Active’ service, followed by 5 years ‘Reserve’). After initial training Walter was posted to the 1st Battalion in Londonderry. With the rest of the Battalion Walter sailed from Belfast on the SS Massilia for Le Havre on 14th August 1914 and arrived in France on 16th August, confirmed by his Medal Index Card.

As a member of ‘C’ Company, Walter saw action at Audregnies on the 24th August, on the right of the line under Captain W.E.L.R. Dugmore. As the Battalion was withdrawing Walter found himself near to the C.O. of ‘D’ Company, Captain Ernest Rae-Jones, as they ran into the German Magdeburg Division. Captain Jones fired on them with his revolver and was immediately killed, along with Drummer Hogan.

[N.B. Drummer 9696 Ernest Hogan, ‘A’ Coy., is buried alongside Captain Jones in Wiheries Communal Cemetery.] Corporal Crookes and Private Garrad were wounded and Garrad died shortly after, shot through the stomach. [N.B. Pt. 10303 Frederick Garrad is buried in Aubichicourt Cemetery.]

At this point Walter was captured and the Records of the International Red Cross chart his journey around various p-o-w camps over the next 4 years.

On 19th December 1914 he was recorded at Senne prison camp; on 20th January 1915 on the “Verzeichnis der englischen kriesgefangenen in sennelager” [Directory of English prisoners of the war in Sennelager]. On 23rd February 1916 Walter was listed among the prisoners at Osnabrűck Camp, and was finally repatriated on the SS Porto which arrived at Hull on 22nd November 1918.

After the War, Walter, who witnessed the burials of Captain Jones and Drummer Hogan, wrote an article detailing the events of 24th August. [Published in “The Oak Leaf“, pps 150 – 157.]

Walter’s brother, Private 3/2939 Arthur Crookes, enlisted in the 6th Battn., York and Lancs Regiment, and was posted to Egypt on 18th September 1915.

The 1st Battalion moved on to Salonika to aid Serbia against the Bulgarian forces and were involved in various actions including the capture of Barakli Jum’a.

in our sister site and the service of Pte. 27722 Henry Stephen Brunt.

In the December quarter 1925 Arthur married Lily Sharpe (pictured left) in Doncaster, Yorkshire. Like Walter, they also had 6 children (not named her for privacy reasons).

The 1939 Register shows the family living at 50 Doncaster Road, Isle of Axholme, Lincolnshire. 42 year old Arthur was working as a “Builder’s Labourer“.

On 25th April 1967, whilst visiting his son, Edward, and family in Canada, Arthur became ill and died in Campbell River, British Columbia, where he is buried.

Lily died in the Doncaster District, in the June quarter 1974, aged 69.