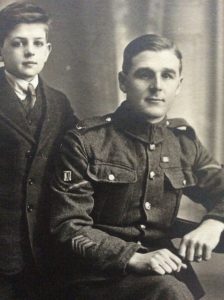 The photo (right) is of Nunnick with his younger cousin, Nunnick Harrison, son of Kate – Tabitha’s sister.

Shortly before the 1901 Census (RG 13/3369) Tabitha died. At the time of that Census the family was living at the Regimental Barracks, Chester. In the September quarter 1908 George re-married, Alice Louisa Pate, who had 3 children from her first marriage to John Pate. The 1911 Census (RG 13/21863) shows George still a Soldier, living with the family at 87 Watergate Street, Chester. However, Nunnick had left home by then and the 1911 Census of Ireland shows him serving with the 1st Battalion in Belfast.

After going to War with the 1st Battalion, Cheshire Regiment, Nunnick was taken prisoner and spent the next 4½ years as a Prisoner of War.

After the War he was discharged and in c. 1923 he emigrated to Canada,  and he married Mary Ruth Sullivan in Fort Francis, Rainey River, Ontario, on 17th September 1932. He worked for a logging company before becoming an officer with the Canadian Customs and Border (photo left). They had one child, Jean Katherine Ann.

In June 1959 he took a trip back to visit his family in Chester, arriving from Montreal into Liverpool on the R.M.S. Carinthia on the 25th. returning on the same ship on 2nd September.

Nunnick spent the rest of his life in Fort Francis, Ontario where he died on 7th April 1963. His wife Mary also died in Fort Francis 0n 28th December 1982.

Military Service: Nunnick’s Service Papers are not available, but his Service Number (8708) would suggest an enlistment date of about October 1907. (e.g. Cpl. 8753 H.W. Howells enlisted on 28th November 1907.) If this was the case he would only have been about 14 years 6 months old.

He was on a 7+5 period of service (i.e. 7 years on ‘Active’ Service followed by 5 years Reserve) and posted to the 1st Battalion in Ireland, sailing from Belfast on the SS Massilia for Le Havre on 14th August 1914. He arrived in France on 16th August, confirmed by his Medal Index Card. As a member of ‘D’ Company, Nunnick saw action at Audregnies on the 24th August, on the right flank under Captain E.R. Jones or Captain W.S. Rich.

… the ensuing action during the Battle of Audregnies.

At about 5 p.m. on that day Major Chetwynd-Stapleton realised that ‘B’ Company was almost surrounded, and realising the importance of Audregnies for the security of the left flank, decided first to try to find Colonel Boger and set off up the road towards the right flank.

At about the same time Captain Ernest Rae-Jones, ordered the men of ‘D’ Company to retire. They left the road and moved along the railway line in the direction of the Bois d’Audregnies. To get to the railway they had  to negotiate several hundred yards of rising under heavy-machine gun fire

Crookenden described what happened next: “‘Here they ran into the Magdeburg Regiment which was going into bivouac. Of those who remained Capt. Jones and Pte. E. Hogan were killed. Cpl. Crookes, who had previously been wounded, collapsed and Pte. F. Garrad was mortally wounded.

Raynor and [Cpl] Blake were soon rounded up by the enemy after a gallant resistance. Sgt. Raynor, who had shown great courage and initiative, and who had fought on to the last, was later awarded the DCM. ”

Nunnick Blake also witnessed the burials of Captain Jones and Drummer Hogan after he was captured at Audregnies and before he was taken off into captivity in Germany.

No Record can be found of Nunnick’s prisoner of war location in the ICRC files. However, like many of his comrades it is likely he was finally repatriated through Hull in November 1918. Family history recalls that his maternal aunt, Kate Markland (Nunnick’s deceased mother’s sister) used to send him parcels whilst a prisoner or war. “I remember she told me she would cut a loaf of bread into very thick slices and toast them, when he received the parcels he was able to eat the bread OK.”  [Source: Kate’s granddaughter, Cath.]

After repatriation Nunnick would have returned to his Battalion, until his discharge, which must have been before 1923, when he emigrated to Canada. He spent most of the rest of his life there and died in Fort Francis, Ontario on 7th April 1963.

Sources: I am grateful to Nunnick’s great-niece, Cath Paton, for the family background and the photos above.